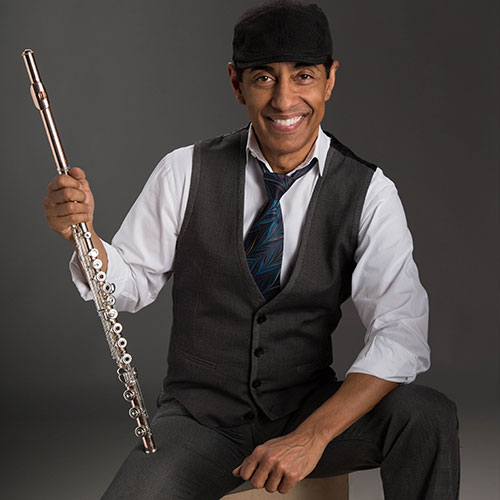 “Based on the musical vocabulary and innovations of its forebears, jazz is always evolving and we have put this season together to feature a dazzling array of modern jazz in all its iterations,” said South Florida JAZZ President and Artistic Director Ronald B. Weber, M.D.  “From veteran stars, such as Monty Alexander, Nestor Torres and Dee Bridgewater, to established, but still rising superstars, pianist Christian Sands and vocalist Jazzmeia Horn, our 2020 season is a snapshot of where jazz is today and the artists that are creating its future. At the same time, we recognize the centennial of the most important figure in the modern jazz tradition, Charlie ‘Yardbird’ Parker. The second offereing of the season features one of South Florida’s most beloved musicians and educators, and a long-term friend, flutist Nestor Torres.”

With his unique style, Puerto Rican flutist Nestor Torres will delight his audience on a magical night in which his unique sound will take them on a journey of Nestor’s greatest successes throughout his musical career. From mainstream jazz, R&B to Latin classics, Torres promises to present a musical kaleidoscope that makes each of his presentations variegated. Torres who is a native of Mayaguez, Puerto Rico, resides in both Miami and Los Angeles, and mentions that 2020 is loaded with new projects, including the release of a new classical music album, which is being produced by the Uruguayan GRAMMY-winning conductor and composer José Serebrier and Julio Bague, vice president of Peermusic. The release of a single is also approaching, where he had a special alliance with the Dominican reggaetonero Mafio, with whom Torres balances his flute skills. He will also be releasing an album of collaborations with important Latin artists in what he calls an avant-garde production.

“Nestor has retained his Caribbean roots, while exploring jazz in its many forms with intriguing fusions with other genres. While his early inspirations were Dave Brubeck, Tito Puente and Cal Tjader, his early heroes were the classical flute icons Jean Pierre Rampal and his “man with the golden flute” (literally) successor, James Galway. Beyond them, his influences include Cuban legend Richard Egües, and jazz greats Herbie Mann and Hubert Laws,” Weber adds.

Bailey Hall is located on the A. Hugh Adams Central Campus at 3501 SW Davie Rd. in Davie and offers free parking.  Subscriptions and individual tickets are available by visiting www.baileyhall.org or contacting the Bailey Hall box office at (954) 201-6884. The box office and phone lines are open Monday through Friday from noon to 5 p.m.; Saturday from 7:00 p.m. until curtain time.  All performances begin at 8:00 p.m.

South Florida JAZZ (SFJ), a nonprofit 501(c)(3) arts organization.  (SFJ) was founded in 1991 by a cadre of Hollywood jazz-loving residents with the ambitious goal of expanding their municipal jazz festival into a national event featuring the finest jazz artists extant. Within three years, SFJ had taken over full production of the event that would consistently present a plethora of jazz legends and stars, while also featuring the very best of the abundant Florida jazz artists, both professional and collegiate, over three days and nights. The Hollywood Jazz Festival was the signature jazz event for the region through 2005. The SFJ seasonal concert series, which began in 1996, is acclaimed for its superior talent, literally from around the globe. Our cultural partnership with Bailey Hall that began in 2018, gives “South Florida JAZZ at Bailey Hall” an outstanding presentation venue from this time onward.

Funding for South Florida JAZZ is provided in part by grant from the Broward County Board of County
Commissioners as recommended by the Broward Cultural Division.