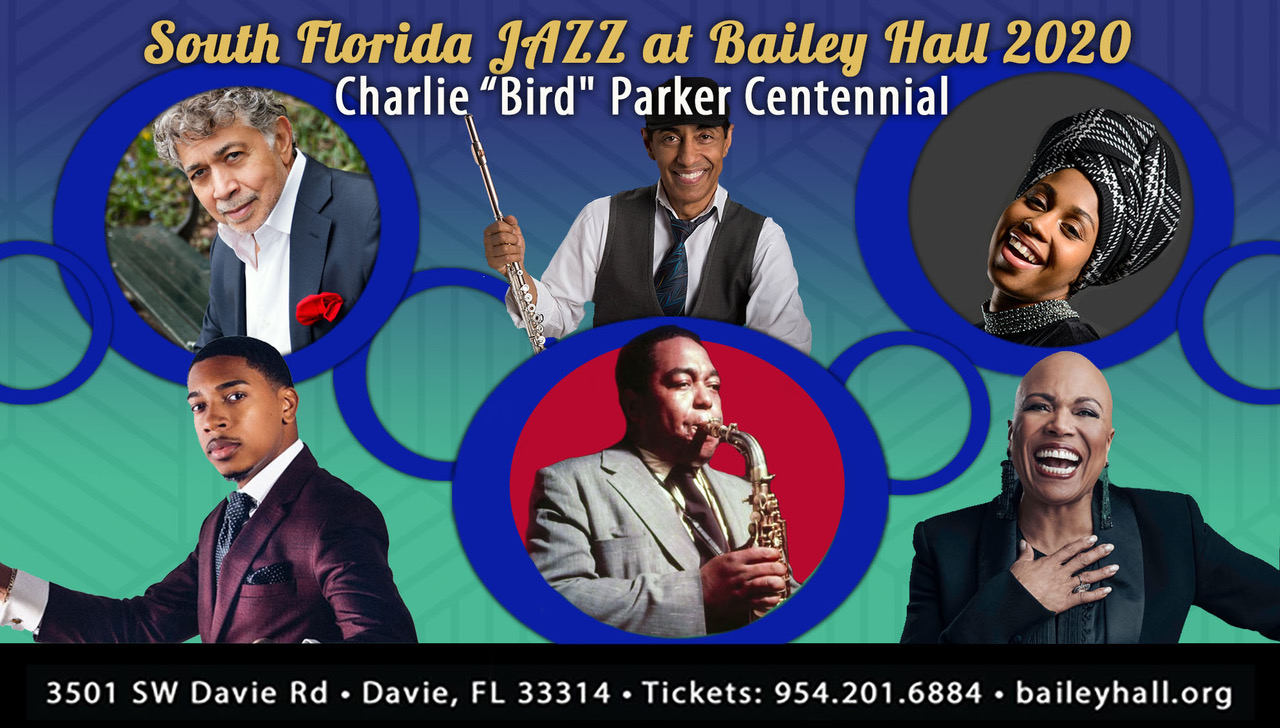 Bailey Hall is located on the A. Hugh Adams Central Campus at 3501 SW Davie Rd. in Davie and offers free parking.

Subscriptions and individual tickets are available by visiting www.baileyhall.org or contacting the Bailey Hall box office at (954) 201-6884. The box office and phone lines are open Monday through Friday from noon to 5 p.m.; Saturday from 7:00 p.m. until curtain time.  All performances commence at 8:00 p.m.

“Based on the musical vocabulary and innovations of its forebears, jazz is always evolving and we have put this season together to feature a dazzling array of modern jazz in all its iterations,” said South Florida JAZZ President Ronald B. Weber, M.D.  “From veteran stars, such as Monty Alexander, Nestor Torres and Dee Bridgewater, to established, but still rising superstars, pianist Christian Sands and vocalist Jazzmeia Horn, our 2020 season is a snapshot of where jazz is today and the artists that are creating its future. At the same time we recognize the centennial of the most important artist in the modern jazz tradition, Charlie ‘Yardbird’ Parker.”

Here are brief sketches of the artists that will appear in 2020 edition of South Florida JAZZ at Bailey Hall:

Back by popular demand, the jazz master from New York by way of Kingston, Jamaica, Dr. Monty Alexander, returns with his empathetic, hand-in-glove trio. Monty’s playing has always retained a strong Caribbean influence, but with a significant bebop flavor and a bright swinging feeling. Influenced predominantly by Nat Cole, Frank Sinatra, Oscar Peterson, and Wynton Kelly, His roots are evident in all of his playing, both on piano and the related melodica, a keyboarded wind instrument.

Born in Mayaguez, Puerto Rico, the dynamic, crowd-pleasing flutist Néstor Torres resided in Miami for many years though currently lives in California. Nestor has retained his Caribbean roots, while exploring jazz in its many forms with intriguing fusions with other genres. While his early inspirations were Dave Brubeck, Tito Puente and Cal Tjader, his early heroes were the classical flute icons Jean Pierre Rampal and his “man with the golden flute” (literally) successor, James Galway. Beyond them, his influences include Cuban legend Richard Egües, and jazz greats Herbie Mann and Hubert Laws.

MARCH 21, 2020
JAZZMEIA HORN
Originally from Dallas, Texas, Jazzmeia Horn became a New Yorker while attending the New School. Possessing a luminous gift that the late great Jon Hendricks called “… one of the best voices I’ve heard in over 40 years,” the 2015 Thelonious Monk Competition winner is a rising jazz superstar. Her 2017 debut, A Social Call, in her words, a call to social awareness, was nominated for a Grammy® Award and voted the best jazz vocal debut in the 2017 NPR Music Jazz Critics Poll. Her newest release, Love and Liberation, is a call to action.

There is only one individual who unquestionably revolutionized jazz, taking it from the bouncy, danceable Swing Era to searing bebop. That was Kansas City-born alto saxophonist Charlie “Yardbird” Parker. His impact on the emerging art form was astounding and breathtaking, creating an extraordinary improvisational style and even an iconoclastic lifestyle that changed music and individual expression forever.

Christian Sands was born in New Haven, Connecticut. Like many accomplished performers, he began piano lessons at the age of four. He comments that “I grew up with [the piano] in the house, in the classroom and on stage, so it has always been a huge part of my life.” As a teenager he was mentored by the legendary Billy Taylor. He then went on to study at the Manhattan School of Music. Upon graduation, he joined acclaimed bassist Christian McBride’s Inside Straight band and also McBride’s trio. Christian now leads his own band full-time.

Over the course of a multifaceted career, Grammy® and Tony® Award-winning jazz giant Dee Dee Bridgewater reached the upper echelon of vocalists, putting her unique spin on standards, as well as taking intrepid leaps of faith in re-structuring jazz classics. A fearless explorer and keeper of tradition, the three-time Grammy-winner won the Grammy for Best Jazz Vocal Album for Eleanora Fagan (1915-1959): To Billie With Love From Dee Dee. In addition, in 2017, Ms. Bridgewater was the recipient of the NEA Jazz Masters Fellowship, the highest award our nation bestows upon jazz artists.