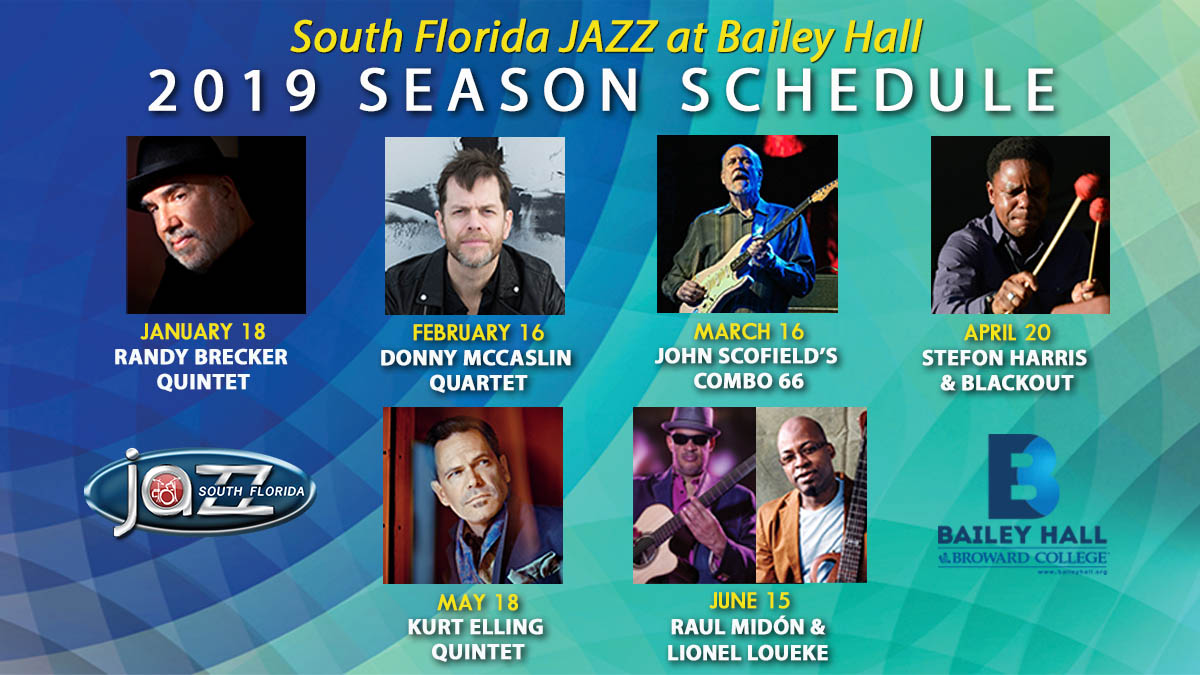 Bailey Hall is located on the A. Hugh Adams Central Campus at 3501 SW Davie Rd. in Davie and offers free parking.

Subscriptions and individual tickets are available by visiting www.baileyhall.org or contacting the Bailey Hall box office at (954) 201-6884. The box office and phone lines are open Monday through Friday from noon to 5 p.m.; Saturday from 7:00 p.m. until curtain time.  All performances commence at 8:00 p.m.

“Based on the musical vocabulary and innovations of its forebears, jazz is always evolving and we have put this season together to feature a dazzling array of modern jazz in all its iterations,” said South Florida JAZZ President Ronald B. Weber, M.D.  “From veteran stars, such as Randy Brecker and John Scofield, to established, but still rising stars Donny McCaslin and Stefon Harris and international sensation Lionel Loueke, our 2019 season is a snapshot of where jazz is today and the artists that are creating its future.”

“We are excited to present the evolution of the “South Florida JAZZ at Bailey Hall” concert series and to welcome these acclaimed artists to our stage,” said Dr. Dan Barnard, associate dean of cultural affairs and director of Bailey Hall.

Here are brief sketches of the artists that will appear in 2019’s South Florida JAZZ at Bailey Hall:

Jazz trumpeter Randy Brecker was born in Philadelphia to a musical family that included his brother Michael, a remarkably influential tenor saxophone innovator, until his death from leukemia in 2007, that stunned the jazz world. The brothers had created individually successful careers, but they shared a very special bond, often working together, from 1975 on, as the Brecker Brothers Band, which garnered five GRAMMY Awards with their final two recordings. Cumulatively, the brothers tallied 21 GRAMMYs and 46 nominations.

Randy is a supremely gifted player who adds a solid dimension to every musical situation and configuration. He is most comfortable in his own band, a hard-swinging quintet with Randy’s wife, Ada Rovatti, sharing the frontline. The group often gives more than a nod to the treasured Brecker Brothers repertoire.

Three-time GRAMMY® nominee Donny McCaslin is the leading saxophonist, composer, and musical pioneer of his generation, receiving wide commercial and critical acclaim in jazz, and even rock and electronica circles alike. McCaslin attended Berklee College of Music, where in his senior year he would join NEA Jazz Master Gary Burton’s quintet. Moving to New York in 1991, he quickly made a name for himself as a first-call soloist and touring musician,

Named “one of the hottest jazz tickets in the world” for 2017-18, the Donny McCaslin Group has performed over 80 shows on 5 continents each of the past two seasons in support of his hit recording, Beyond Now. He also has a GRAMMY® for his appearance on David Bowie’s “Black Star” album.

John Scofield is one of the most influential and innovative guitarists of his generation. He has spent the last 40+ years blazing a trail through the post-fusion wilderness, bringing his singular voice to a variety of different projects. His hallmark is his masterful improvising, and his music generally falls somewhere between post-bop, funk-edged jazz, and R&B. The Gary Burton and Miles Davis stints were pivotal in his career. Along the way he has garnered nine nominations and three GRAMMY Awards.

Scofield has led his own bands with a variety of flavors, including jam bands, funk with a host of great sidemen. He arrives in South Florida with a straightahead jazz configuration of piano, bass and joined-at-the-hip drummer Bill Stewart.

Passionate artistry and astonishing virtuosity have propelled mallet player, Stefon Harris, to the forefront of the invigorated jazz scene. He has been heralded as one of the most important artists in jazz. In addition to his four GRAMMY® nominations, has been named Best Mallet player by the Jazz Journalists Association. He also has fared extremely well in the polls that have been dominated reflexively for so long by now-retired Gary Burton.

Educator, musician and entrepreneur, Stefon Harris receive the 2018 Doris Duke Artist Awards. His talent has propelled him for performances around the world. Now with his pet project Blackout, the band that will appear at South Florida JAZZ at Bailey Hall, we hear what has been percolating in the souls of Stefon and bandmates for more than 14 years. And it is impressive.

Chicago native Kurt Elling is the greatest male jazz singer – or just jazz singer – of our time. In a career spanning 23 years, Elling has risen to international prominence as a jazz artist and creative singer. An intellectual superman, he is a master of “vocalese” and scatting, having been influenced by singer Mark Murphy, trumpeter Chet Baker, and poet Jack Kerouac. Remarkably, each of his twelve albums was nominated for a GRAMMY® Award and Dedicated to You won in 2010 and a 13th nomination in 2017 for Upward Spiral with Branford Marsalis. He is a perennial critics poll-winner and his quintet tours the world. This will be Mr. Elling’s sixth performance for South Florida JAZZ. His last appearance in South Florida was a collaboration with saxophonist Branford Marsalis with whom he was awarded another GRAMMY® for Upward Spiral. In addition, Kurt, bright, inquisitive and eloquent, is an especially gifted writer, both of lyrics and prose

“AN EVENING WITH RAUL MIDÓN AND THE LIONEL LOUEKE TRIO”

The genre-bending icons join forces to present a special night of song and guitar wizardry as they perform sets of original material in an evening that will culminate in an unforgettable jam backed by Loueke’s dynamic trio. Midón delivers a signature combination of silky tenor voice and percussive guitar style that is a syncopated, flamenco- and jazz-infused wonder.

From the small West African nation of Benin, Loueke has enjoyed a meteoric rise over the past ten years since he was picked, in 2008 and 2009, as top “Rising Star” guitarist in DownBeat magazine’s annual Critics Poll, appearing on Herbie Hancock’s double-GRAMMY-winning album, The Joni Letters. He combines harmonic sophistication, soaring melody and a deep knowledge of African music to create a warm and evocative personal sound.